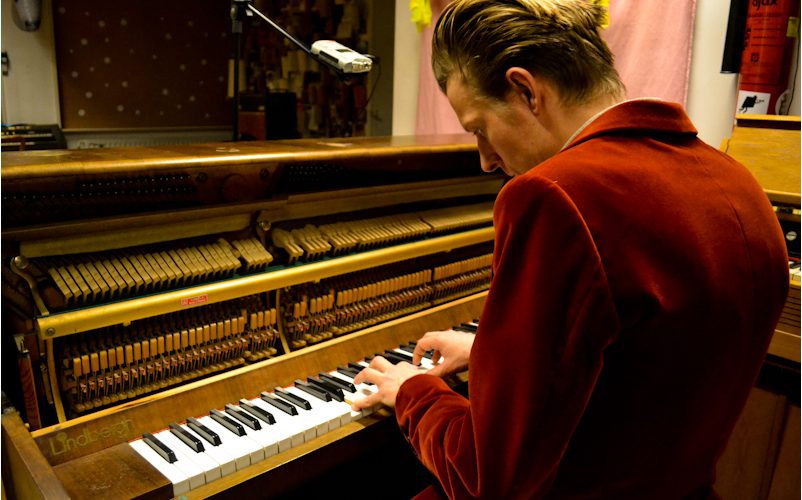 In the last four months of 2013 I saw Bent van Looy perform live three times: at Into The Great Wide Open at Vlieland, in Tivoli’s Spiegelbar and at EKKO, both in Utrecht. Twice solo, once with band. All three shows were very good, although it was extra special to see the show at Tivoli with Jason Falkner and Anne Soldaat playing in his band. Ever since the first listen to his solo debut I wanted to film this session.

Listening to Van Looy’s solo debut Around The Bend made very clear why Excelsior Recordings are the label releasing it; proper songs that sometimes resemble the old Solo work and other references could be made. But after a few spins the focus moved to the Das Pop singer’s own style of songwriting and singing. On the stage he proves his showmanship and keeps the crowd entertained, even when it’s just him and his piano.

Like Anne Soldaat, Van Looy hopped on a plane to Los Angeles to work with Jason Falkner (Beck, Paul McCartney, Air, Daniel Johnston a.o.) on what’s become his first solo album. Only weeks ago I published a session with Clean Pete, who’s record was mixed by Falkner.

All in all, I feel it’s safe to say that we’ll be hearing a lot more from Van Looy in the future. The singer who lives in Paris and regularly performs at David Lynch’s club Silencio there, has put out a really good record and I personally already can’t wait to hear what he comes up with next.

We recorded this session at the beautiful Epic Rainbow Unicorn Studio of producer Simon Akkermans (C-Mon & Kypski) in Utrecht, who was very kind to just give me the key for that day. Thank you Simon.