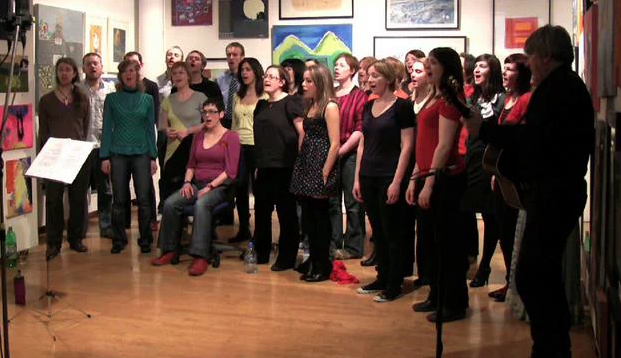 In March, producer Ro Halfhide and I went to Glasgow to film a documentary and many sessions. On the first day, the choir The Parsonage was the second act to record one. The choir, named after Gram Parsons, before worked with Rod Stewart and Echo and the Bunnymen live and on records.

The Parsonage is the first ever choir to record a Onder Invloed session. You could say it’s a mile stone. Ro’s done a brilliant job on the recordings. The location was an art gallery called Project Ability, one of Scotland’s leading specialist arts organisations. They’ve been supporting people with different kinds of disabilaties to take part in art projects since 1984.

I was looking forward to this session ever since Davie Lawson had me listen to their MySpace when he came to Utrecht in February. A bold collection of individuals who basically just love to sing, performing old songs they love, wether it’s Gram Parsons, Woody Guthrie, Hank Williams or even Joy Division. Their joy in singing has gotten them far. For example: they sang on an album by Echo and the Bunnymen and performed live on stage with Rod Stewart.

Their rehearsal nights are on Mondays, but because Ro and I landed on Monday night late, The Parsonage, or at least 30 of them, changed their schedules to Tuesday for this session. We’re happy they did, and so will you after watching their versions of some straight up classics.

The first ever – and maybe the only ever – choir to record an Onder Invloed session. Enjoy. Photos can be found here.

If I Can Dream (Walter Earl Brown / Elvis Presley)

The Parsonage – You Don’t Miss Your Water (William Bell)