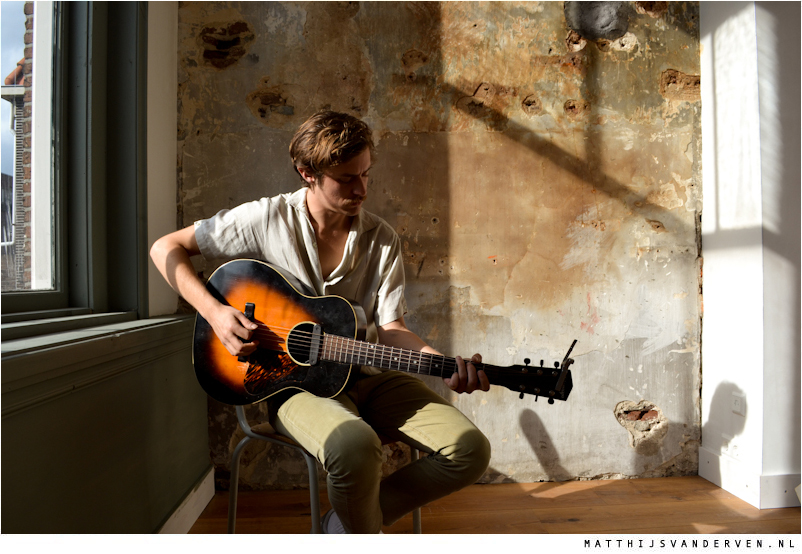 If I’m honest, I didn’t know anything about Jeremy Quentin, a.k.a. Small Houses, until I received an email and started listening to his songs. Usually I’ll have been following musicians for a while before a session is filmed, but it didn’t take me long to get drawn to Quentin’s voice and songwriting.

This fall, Utrecht based music venue EKKO opened its doors and let us film in their backstage room which was still being rebuild. The venue has been renovated a lot over the last year or so, and it really does look better every time.

Small Houses is the Atlanta, USA based folk project featuring the songs and poems of Quentin. His songs contain carefully crafted finger-style guitar playing and lyrics about his life, loves and surroundings. Sometimes the sound of the succesful Swedish songwriter The Tallest Man On Earth resonates, but what struck me most was that although he appears a ‘classic’ singer songwriter at first listen, I found myself discovering all kinds of new clever constructions in his songwriting, guitar playing and melodies with each listen. I was hooked.

This session will be one I’ll remember fondly for a long time to come. The songs were beautiful, Quentin turned out to be one hell of a nice guy, the room formed a great backdrop and I positioned him just right to get amazing shadows in the video. In short: everything just kind of came together and worked.

The songs played in this session are:
1. I Buried You So Deep (Frontier Ruckus)
2. While I’m Away (Old Names)
3. Brad Logan (Rancid)
4. Old Habits (Small Houses)

I Buried You So Deep (Frontier Ruckus, Eternity Of Dimming, 2013)
YouTube | iTunes | Spotify