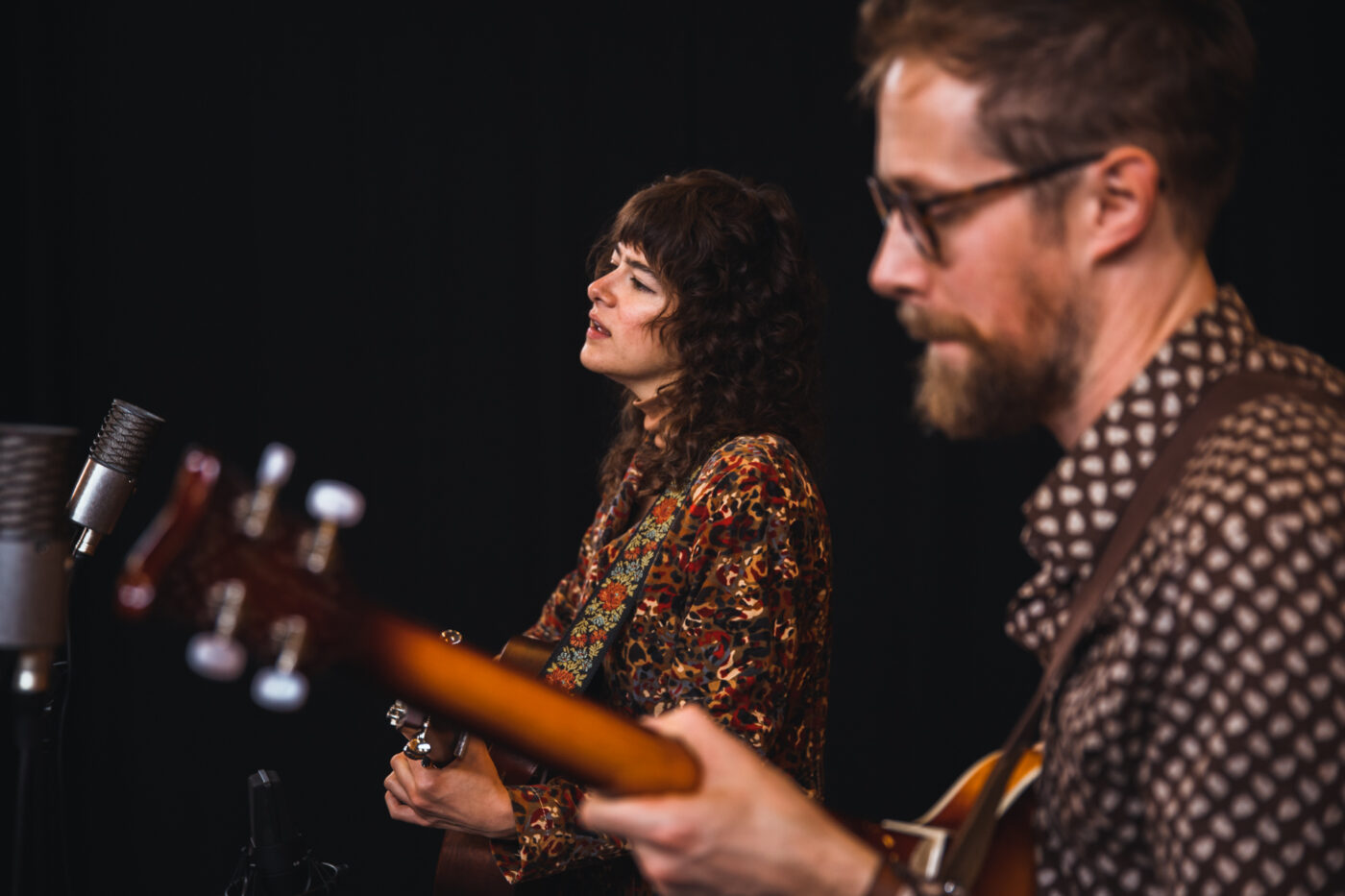 If you’re described as ‘Laurel Canyon-style folk rock with shades of Joni Mitchell’, you’ve got my attention for sure. And to be honest, the soulful folk duo Native Harrow had my attention well before The Times wrote those words. Late 2021, we met at the Grand Theatre in Groningen during TakeRoot festival and filmed covers of Feist and Jackson Browne, as well as their original The Dying Of Ages. This year, they added their gorgeous self produced album Old Kind Of Magic (Loose Music) to their oeuvre, and its title perfectly describes the music they create.

Native Harrow’s Devin and Stephen wrote a guest essay on their influences and the songs they chose to cover for this session. You’ll read that below, in between the videos.

“Feist sings a song that knows exactly how all of our hearts break and heal.”

“When choosing two songs by artists we admire and are influenced by we wanted to capture a sense of modernity as well as a sense of yesteryear, as both play a large part in our own recordings.”

“We are profoundly inspired by the work of Leslie Feist, from her songwriting and musicality to the production and aesthetic of the recordings. We selected Comfort Me because we love the lyrics and the way she uses her voice on the track. A voice is an instrument of course, but the technique of maneuvering the voice to accentuate the instrumentation is unique to her songwriting and it’s just beautiful. The music and her vocal play off of one another like a game of catch. They swirl around in our ears, building a world, a far off place, where rivers run, birds call, and Feist sings a song that knows exactly how all of our hearts break and heal.”

“Jackson Browne is a true poet of the canyon.”

“Next, a song to represent our roots. We both have a deep passion for the music of the 60s/70s, and especially music from Laurel Canyon. One of the first songs Devin learned on guitar was ‘Barricades of Heaven’ by Jackson Browne, so we thought what better way to represent that side of our inspirations than to perform the song she’s been playing to herself and the odd friend for over a decade? To us, Browne’s songwriting is some of the finest out there, a true poet of the canyon.”

“There are thousands upon thousands of songs we would have loved to perform for this session. It’s an overwhelming task to pick just two! Our musical influences and interests range from the the early days of Broadway show tunes, to dusty plains bluegrass and southern blues, from east village folk and jazz, Philly and Memphis soul, avant-garde chamber music, and good old Rock n’ Roll, to early 00’s indie and just about everything in between. In our record collection there is currently a Bill Withers Live at Carnegie Hall (one of the best live records EVER) next to Andrew Lloyd Webber’s Cats Original Cast Recording. You get the idea. Our library definitely reflects the tapestry of our lives as artists, fans, and humans. We dig music, it is what our lives are fueled on.”

“Out of all the inspirational artists, songwriters, bands, and styles we admire, the sounds of nature may well be the largest inspiration for us. The music we hear out on a walk in the woods; birds calling, wind blowing, trees leaning, those are where the beginnings of where composition comes from, where the poetry of the song is built upon, and where we become real.”