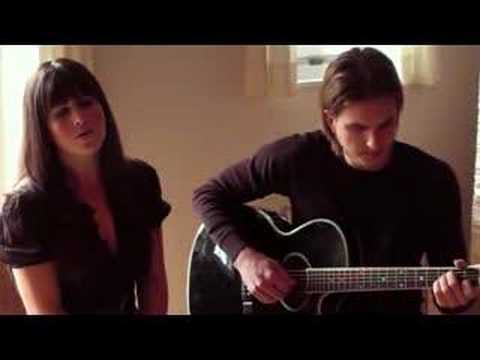 Mia Silvas chose to record not three, but four songs for Onder Invloed. Together with her guitar player – and best friend Ryan Haberfield, she played songs from My Chemical Romance, Eva Cassidy, Al Green and Michael McDonald. So, there’s a lot of variety in this extra long session.

Like the Dutch dancetrio Nobody Beats The Drum earlier told Onder Invloed; Mia and Ryan also started out by listening to Michael Jackson. Who would have then (and now) guessed Ryan played in a hardrock band before joining Mia on stage?

While a lot of people still connect Mia to her younger sister Lucie (who did a duet with Dutch singer Marco Borsato in 2006), she’s working hard on a musical career on her own. Her self-released debut album ‘A Lot Like Me’ was released in 2007 and earlier this year she toured The Netherlands, opening for Wouter Hamel. A good fit, as she also writes poppy jazz songs.

Anyway, with this first international session by Mia Silvas, the Onder Invloed website – onderinvloed.com – heads off to a beautiful start, with many great sessions still to come. Already two more have been recorded, one will be next friday and a lot more will follow in the next months.

For now, you’ve got many minutes under influence waiting for you underneath, delivered by Mia Silvas. Don’t wait any longer and watch the songs Mia and Ryan played in an apartment in Amsterdam.

I Don’t Love You (My Chemical Romance)

I Don’t Love You (My Chemical Romance, The Black Parade, 2006)
YouTube | iTunes | Spotify