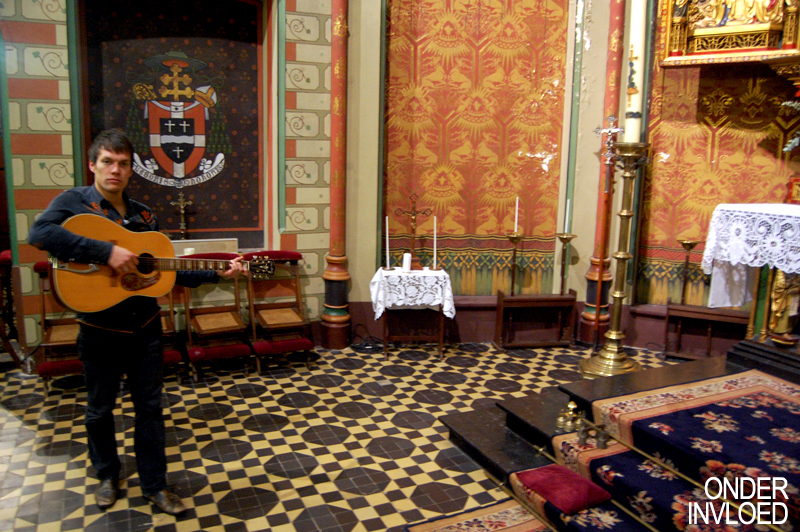 A year after the original date, GEM-singer Maurits Westerik stood in front of the Onder Invloed cameras and did what we hoped for. He sang the songs better than the originals, at an impressively beautiful location: the St. Willibrord Church, in the middle of Utrecht. It really was worth the wait.

Westerik is known for being a huge Bob Dylan fan. On rare occasions, he performes solo and plays a lot of Dylan songs, and he does it well. He doesn’t do it a lot, because of his busy schedule, with his band GEM on top of his priorities. GEM released their third album ‘NEW’ earlier this year and played a lot of shows, including the Lowlands festival.

With a voice more raw than Dylan will ever get, Westerik sings his songs with even more power. That’s one of the reasons I was really looking forward to this session. Another reason was his request to film the whole thing at a special location. Like an old building or a church. We managed to get the approval of the wonderful St. Willibrord Church, a really special building, which is almost completely renovated. We got the entire building for ourselfs, and it brought us some great footage.

Footage, shot with a new and better camera, for the first time. Bought the evening before the session. But what’s even more worth mentioning, are the acoustics in the church. Ro Halfhide managed to control the reverb and recorded the audio perfectly, as usual. Westerik played two songs by Dylan and one by The Clash.

Guns Of Brixton (The Clash)