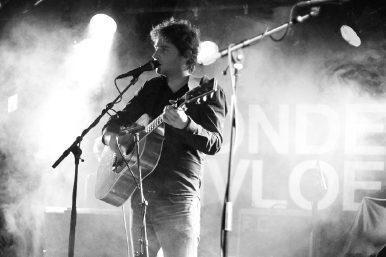 I was filming on a boat on the sea of Terschelling. Around me, the band members of Johan were playing some songs, enjoying the sun and watching the view. It was during the Oerol festival and the one thing that stood out to me the most, was guitarist Maarten Kooijman’s voice. Johan was a band I loved, it was one of the first Dutch bands I ever listened to, actually. When Johan split up, I told Kooijman I wanted him to come and play solo at an Onder Invloed show one day.

So, in January 2011 he did, during the first Onder Invloed night at EKKO. What a voice. It took me far too long to edit these videos, but here they are. There are even three more videos of that show waiting to be published. Soon. Let’s hope Kooijman will come up with a solo album in the future. But these videos should keep you occupied for a while. Without tents at public places and smelly lowlifes.