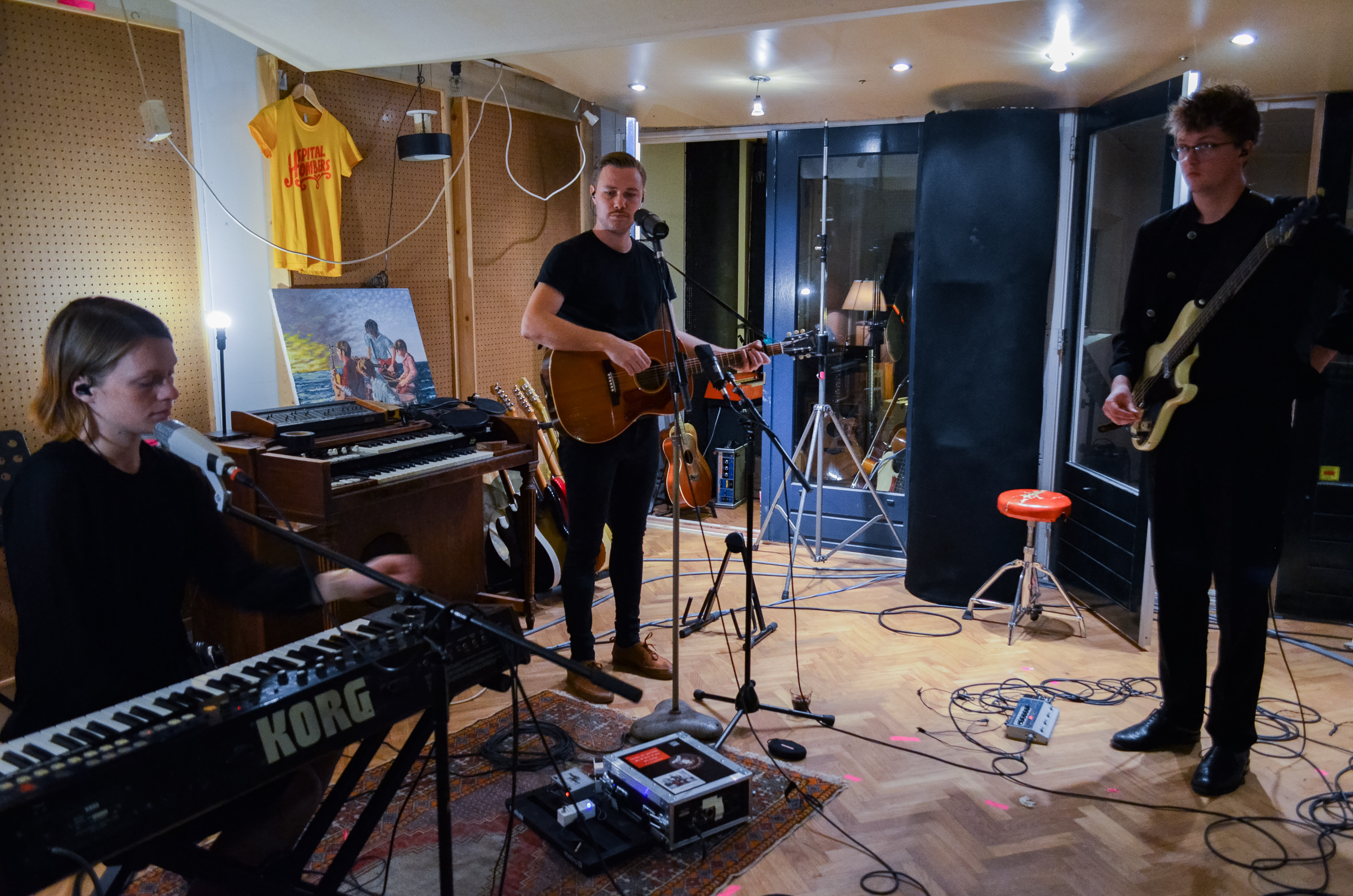 Good things come to those who wait, right? You bet. It took me about a month to really get into Kim Janssen’s second album Ancient Crime, back in 2012. I remember there were a lot of nice records released at the same time, records that were more easily accessible probably. But none of those are still in my rotation, except for Janssen’s. Because once I got into it, I couldn’t get out. And luckily for me, and all of us, the Dutch songwriter didn’t stop there and followed it with the equally stunning The Lonely Mountains EP (2013) and Cousins (2017).

A couple of weeks ago, Janssen and his band joined us at the Schenk Studio in Amsterdam to record two astounding cover versions of Vampire Weekend’s Ya Hey and Bruce Springsteen’s Streets Of Philadelphia.

The loneliness of being ‘God’

‘I’m a big Vampire Weekend fan, although I remember hating their first record’, Janssen laughs. ‘It took some time for them to grow on me. The second album was more up my alley and the third I really loved. At first listen everything seems to be just very hyper and poppy but I find it’s a layered and poetic record and the production feels fresh and original.

‘I wanted to choose a song that wasn’t too obvious for me as a singer songwriter, but also wasn’t too gimmicky. I realized Ya Hey would be perfect and that I’ve actually always wanted to do a version of it anyway. The chorus, especially, I think is beautiful. I love how Ezra Koenig uses a well-known Bible story to put God in a different light – not a far-away, all-powerful being, but a lonely person, perhaps because of all the distance and loneliness that would come with being ‘God’.

Janssen thought it’d be a difficult song to make his own. ‘The Vampire Weekend production is a such a big part of the song but at its core it’s very much like a traditional gospel song with simple chords and a beautiful vocal melody. I wanted to take on a bit more of folky approach but I loved the busy drum and bass parts, so I kept that in the arrangement.’

Well, he succeeded don’t you think?

Nebraska as the gateway to Springsteen’s work

When Janssen messaged me the songs he was planning to cover while we were arranging the session, I could immediately hear him singing Streets Of Philadelphia. Maybe it’s a side effect of running this website for over a decade. Janssen didn’t grow up listening to Springsteen though. ‘He’s definitely been a big influence for me, but unlike some of my friends I didn’t grow up listening to him, I was a little late to the game. At first, I only knew him from his later records that I saw at gas stations, like Working On A Dream. I was aware of his hits of course, but they never really registered with me. Nebraska became the gateway record for me, I immediately loved it. It feels so incredibly urgent and honest. My Father’s House for example is just stunning, one of the best songs ever written. That’s when I revisited all his earlier work and grew to appreciate it.’

‘I love the brooding nature and drama of Streets of Philadelphia. The synthesizers are minimalistic while the drums keep driving up the tension and Bruce bares his soul.’

Waiting for days to listen to one song

Janssen grew up in Asia, where his parents did development work in countries like Thailand, Cambodia and Nepal. They first went to Thailand when he was two, then moved around every two or three years. Later they stuck around in Nepal for six years. When he was eleven years old, he went to a boarding school in Kathmandu. ‘Most of the kids there lived in Kathmandu, apart from me and a couple of others so we stayed at the school. It wasn’t one of those huge boarding schools where kids are anonymous, luckily. I’m still in touch with some of the friends I made there, who’re now living in Germany and England for instance.’

‘The school I attended was a Christian school, and the first music I listened to as a twelve-year old was American gospel. Not the old gospel, but the new sort of Christian rock bands like Third Day, DC Talk, Lifehouse and Switchfoot. Shortly after that, my world was expanded by Muse’s The Origin Of Symetry and Travis’ The Man Who. To this day I still really love that record; it’s very light, subdued and melancholy. After that I got into a phase of listening to emocore and screamo.’

‘Those days the internet was still pretty new and especially in Nepal you barely had any connections. I remember going to a friend who had Napster-like software and we’d download a song with a download speed of two kilobytes per second. We’d wait for days for his computer to finish downloading one song. Every time we got to listen to a new song felt like a party. At school people would exchange and borrow cd’s off each other. I’d ask someone for a cd, but someone else would still have it for another week, so I just had to wait. It was a lot of hassle, but it really made me cherish every album and I’d play it a hundred thousand times.’

‘At thirteen I started playing in my first cover band with a couple of older kids. It wasn’t that much later when I started thinking about writing my own songs. One of those early songs even ended up on my first record The Truth Is, I Am Always Responsible, released by the Volkoren label in 2009.’ The Dutch label was home to some of Janssen’s influences, he adds. ‘An older Dutch friend always played me new records when me and my family were on holidays in The Netherlands. He’d burn cd’s for me and that’s how I got into that emocore, more specifically the bands in the Dutch underground, like The Spirit That Guides Us, This Beautiful Mess, Brown Feather Sparrow and, later, At The Close Of Everyday.’

There’s a lot more to write about Kim Janssen and at some point, I most likely will. Let’s leave it with this introduction for now though – not in the least because of the fever that’s making my head pound. In case these two incredible videos aren’t enough, and you’ve already listened to his records, why not revisit these two earlier sessions Janssen recorded with The Influences some years ago? The first one has Damien Jurado, Iron And Wine and Pedro The Lion covers, and this live one at Into The Great Wide Open includes a Sun Kil Moon cover and a traditional song.