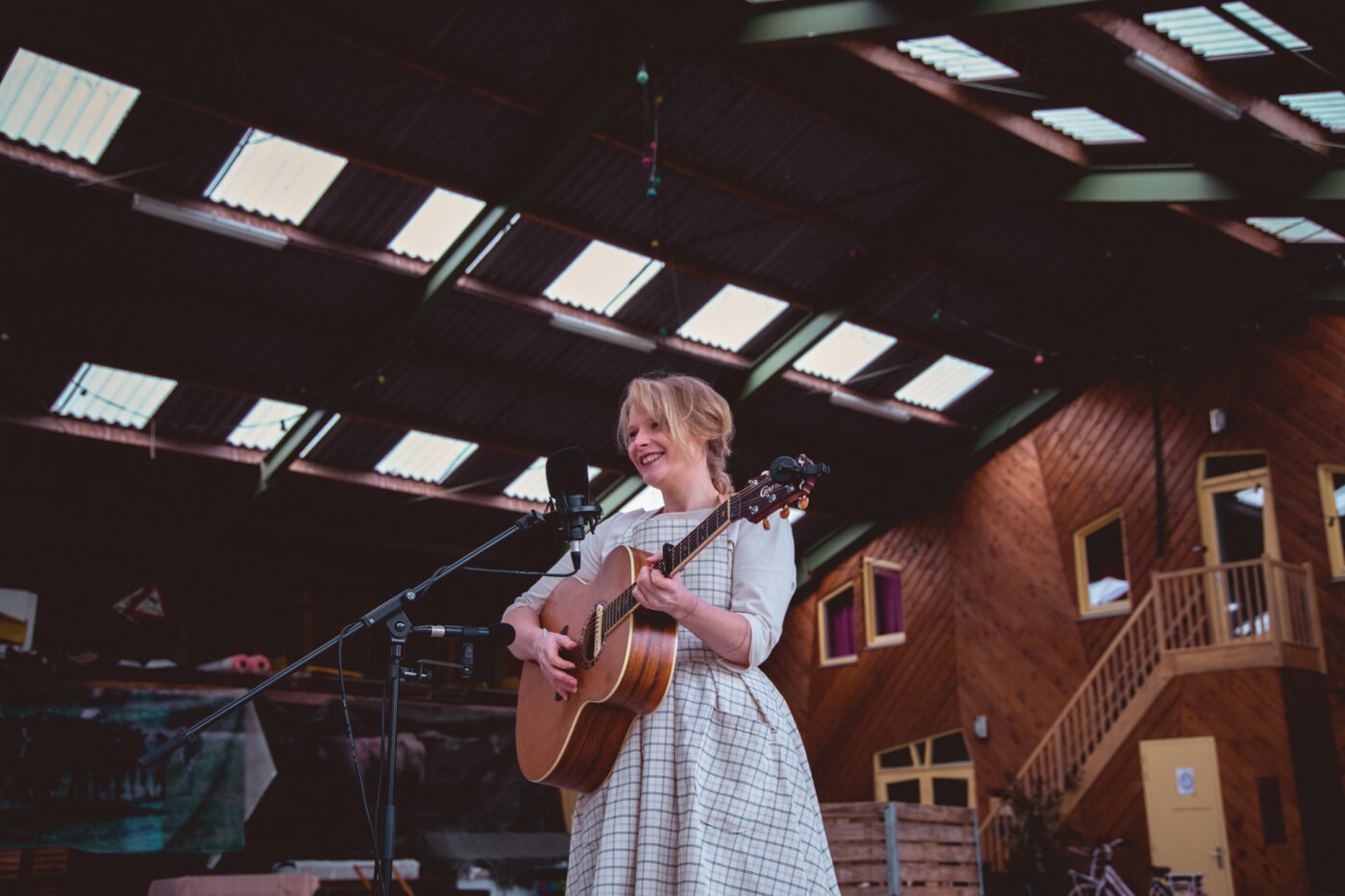 Gitta de Ridder comes walking out of the caravan she’s living in while building a new home in Almere, trying to stop her dog Lucky from giving me an enthusiastic welcome. This moment, right before we filmed this session with Paul Simon and Björk covers, may be the first time we meet, but The Dutch folk singer – who released her third album To Our Children in October last year – is one of those people who make you feel like you’re old friends. Much like her songs feel like you’ve known them for ages too.

Gitta de Ridder kindly agreed to write an article on her influences too, so you’ll find that below, surrounding the videos of her session.

“It’s been a real adventure of musical discovery.”

“When I think of musical influences, I think of my youth. I think of growing up in a home filled with music, mostly hand-picked by my dad.  It would be classical music on Sunday mornings, not so strange, considering my dad grew up with opera, seeing both his parents were professional operatic singers. On weekday afternoons, the house could be filled with the guitar sounds of Hendrix, the new age harp music of Andreas Vollenweider, or the experimental sounds of Jethro Tull, to name a few. His collection is rather extensive. So many treasures to find. I suppose the ones that still stick with me the most are the works of Leonard Cohen and Paul Simon. Or Jeff Wayne’s War of the Worlds and Napoleon XIV’s They’re Coming To Take Me Away, HA-HAAAA!.

Around the time I was 11, I started choosing my own favourites, with my first true ‘band-loves’ being No Doubt and Nirvana. From there on out, it’s been a real adventure of musical discovery, and my favourites range so far and wide I wouldn’t know how to gather them all together in one concise thing.”

“This recording of Diamonds On The Soles Of Her Shoes is something to remember my dad by.”

“The songs I chose to cover both have a lot of history for me. Although I grew up with Paul Simon’s music, I didn’t pay his records much attention throughout my teens and twenties. It was only in recent years that I’ve really taken a dive in. I love how his records contain so much joyful expression and creativity. Finding light in heavy topics as well. I think music has a great ability to bring people together and to cross cultural borders, which I explored in my last record. And to say I haven’t been inspired by Paul Simon’s ventures in this aspect would be a lie. Little did I know as we did this session, that a week later my dad would pass away unexpectedly. So having this recording now gives it a heap of extra meaning for me. A thing to remember him by. Graceland is one of those records that could never leave my heart.”

“Björk has been a significant influence in terms of her artistry and ability to carve out a path of her own. I always think there is something magical and mystical about her. On top of that, her use of electronics and songwriting style is fascinating to me.

During my twenties, I was really into electronica and trip-hop alongside my more acoustic musical loves, and for me, this song represents that part of my music-loving soul. I loved discovering this tune’s folk-song feel once putting it to a few simple acoustic guitar chords.

As my dad would say, ‘Music gives direction to time’. Time and time again, I marvel at how music can change the feel of a space, lift moods, or bring connection with your emotions. A bit of magic, I think.”