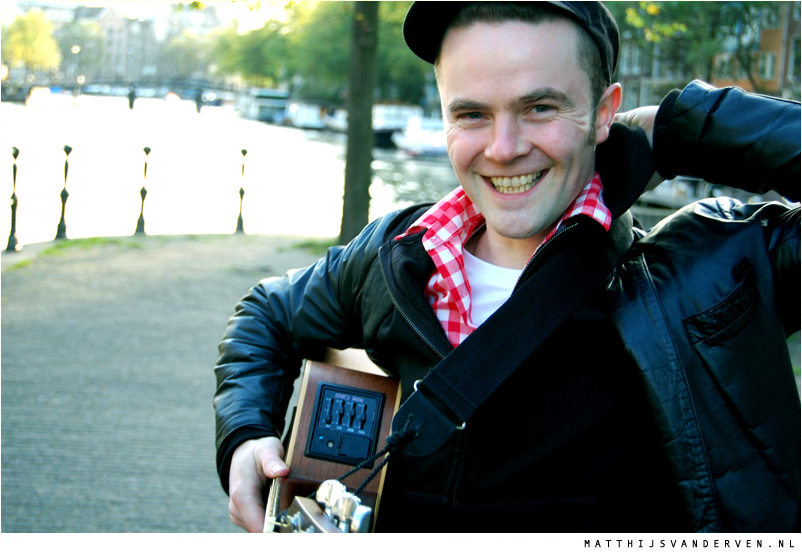 Biff Smith is the lead singer and songwriter of the Scottish band A New International, formerly known as The Starlets. He’s one of my favourite songwriters and currently preparing to release the first album as A New International, since declaring the name The Starlets (three albums) dead. Biff’s also a gifted storyteller, so I’m thrilled that every now and then he’ll write a blog for Onder Invloed.

It’s the last show of the Dutch tour. The rest of the band have already boarded the Happy Boat home and will be halfway to hammered by now, long gone and far out, rolling away across the North Sea, leaving me to do a solo show, a House Concert on the outskirts of the pretty town of Zwolle.

In the car from the centre of town I am briefed by the promoter, Patrick, that the show is a Bachelor Party for a friend of a friend who thinks that a bit of live music might serve as a quirky hors d’œuvres for the boys before they have a rare old night of no-holds-barred bacchanalia down in the local fleshpots. On the way there we pick up Big Klaus who will be the opening act and he seems a jolly fellow, tall and healthy looking, Dutch-style. The atmosphere in the car is laid back and genial. The main shows, for better or worse, have been fulfilled with no significant disasters and whatever happens now can only be a bonus.

We pull in to a neat, sedate avenue of semi-detached houses with tidy lawns and shiny, sensible cars snug in their driveways. Arriving at the house, the host greets us at the front door sporting a pair of fluorescent-orange PVC cowboy chaps with matching ten-gallon hat, a white string vest and a large handlebar moustache, fulsome and lustrous. He formally shakes everyone’s hand and thanks us for coming. As he turns to lead us inside I notice that his cowboy chaps have no backside to them. His bare arse sways happily ahead of us, not a care in the world, all the way in to a living room in which sit 20 or so guys all dressed exactly the same as the host, moustaches included. They are all gathered around a massive HD TV which is showing the Champions’ League final but this is quickly turned off as all moustaches turn and present themselves to the new arrivals. The atmosphere is quietly expectant, oddly polite.

Big Klaus is up first and he opens with a slow and mournful number all about his dead Grandmother. As the Oranje Cowboys stare impassively at him over their impressive moustaches, I am thinking that surely this is a once in a lifetime experience. I cannot imagine that these particular stars will ever align in such a way again. Big Klaus follows up his sombre opener with an even gloomier number all about third world famine. I look at his face but cannot detect any hint of mischief. He apparently believes that songs about famine and dead Grannies are appropriate for such occasions. I’m a tourist here so for all I know perhaps they are. I do what any rational person would do in such circumstances and begin drinking heavily. We all listen politely as Big Klaus gives us his full repertoire of songs about war, death, horror and pestilence. At the end of his set, the entire room has noticeably upped the pace of the drinking. For me, the timing could not be more fortuitous.

By the time I go on everyone, myself included, is just the right side of half-cut, on the up-and-up but badly in need of a payoff. The boys are all aching for some fun. Me too. Having drunk my way into the zone I hit the ground running. The songs come easily and immediately tonight, at my fingertips from the off and the room feels like mine for the taking. There can be no mercy in these situations. I give the boys exactly what they didn’t know they wanted. I give everything I have and tonight that feels like more than usual. I sing and shake and pose and preen and the boys are right into it, whooping and slapping each other’s arses. I leave them with the Big Song and as I’m singing I can feel the connection, joyous and unexpected. At the end of the show there is a big hooray and hats are in the air as we all discover that we have, surprisingly enough, rather enjoyed ourselves. We stick around for a while, chatting happily and drinking beers out of a massive ice bucket that has been plonked pride of place, room centre, but our work here is done. The Oranje posse is now primed, prepared, ready and raring to ride into town, maybe shoot the place up a little. We bid many fond farewells, wishing each other all the very best, and all of us a little surprised about how this has turned out. It has been an odd and charming evening.

As we drive away into the cool summer night, I’m considering asking Big Klaus if he’d be the opening act at all of our shows from here on in.

Biff Smith is the lead singer and songwriter of the Scottish band A New International, formerly known as The Starlets.

He’s one of my favourite songwriters and currently preparing to release the first album as A New International, since declaring the name The Starlets (three albums) dead.

Biff’s also a gifted storyteller. Every now and then he’ll write a blog for Onder Invloed.