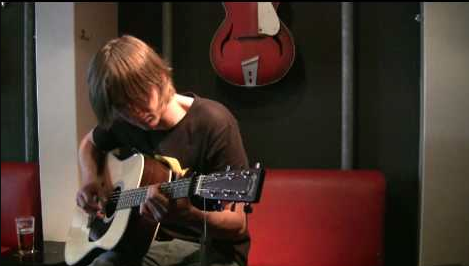 Bertolf Lentink‘s solo career started off really well; his album ‘For Life’ was well received and big shows came. Before this all he was lead singer of The Junes and guitarist for Dutch mainstream singer Ilse de Lange. It all started with his father playing him bluegrass music though. Bertolf played The Beatles, James Taylor, Rufus Wainwright and John Mayer.

We recorded this session at UROCK CAFE in Utrecht, last March, on the same day Bertolf played the Onder Invloed Live show. Bertolf grew up listening to bluegrass, because of his father – an amateur musician himself – playing him records. Bertolf love the genre and explored all fields within it. It probably explains his skills on the guitar; the fast picking at least.

Some of the influences Bertolf covered during his session, you can easily hear in his own songs as well. Just listen to the end of his new single ‘Mr Light’ for example. Beatles all over the place. If you want to discover it yourself, just go out to get his album ‘For Life’. But not before you’ve watched all four videos of his Onder Invloed session.

Me And My Guitar (James Taylor)

Martha My Dear (The Beatles)