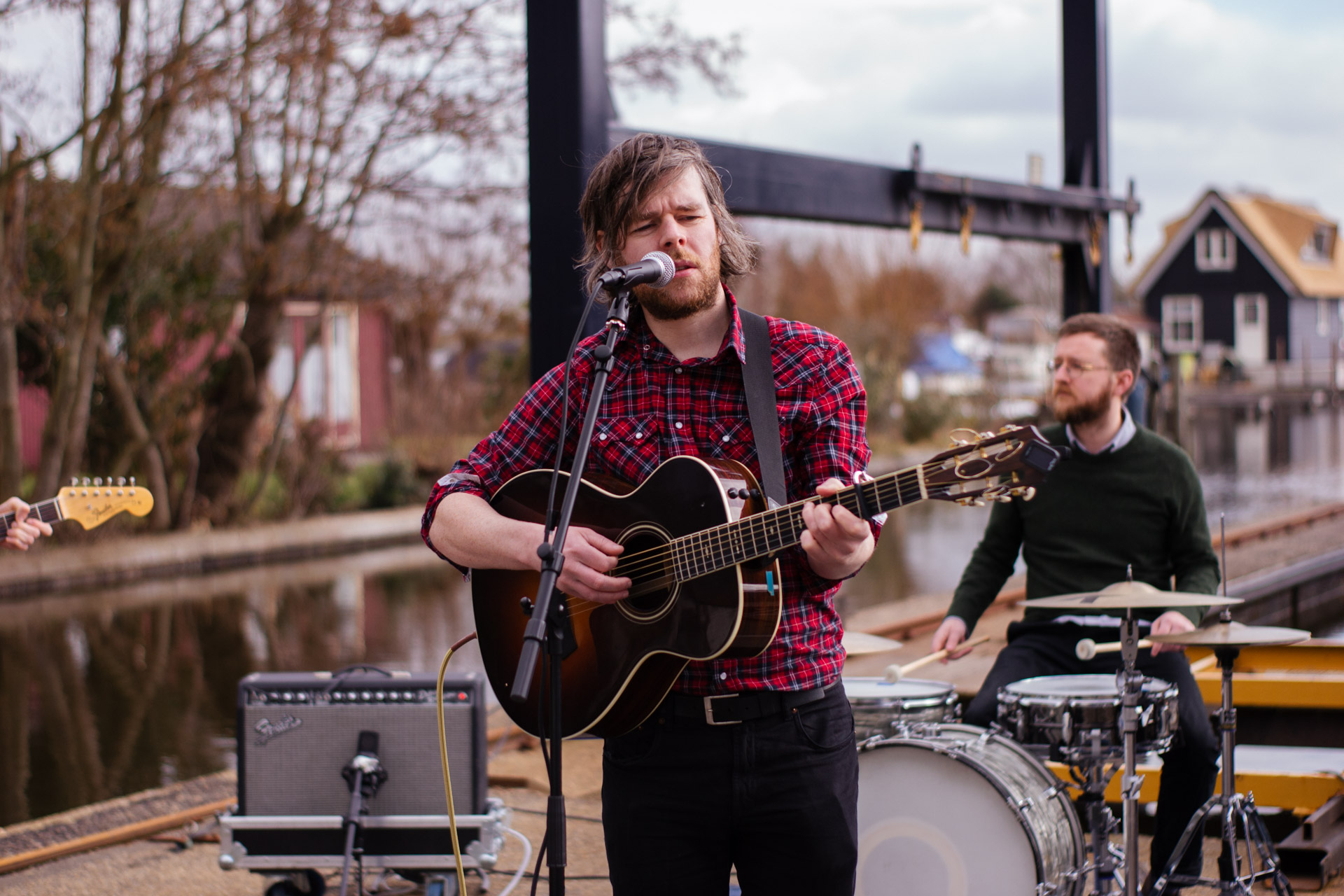 Two years ago, Dutch comedian and radio dj Dolf Jansen asked me to film a show he was doing with a band from Belfast, Northern Ireland. That night, the band blew me away. Dolf was pretty damn good too. But I just had to make sure Arborist would record a session before they finished their first ever Dutch tour. And so we met up at a boat shop next to the B&B they were staying, and filmed four songs, including a Townes van Zandt cover and a traditional song.

Dolf Jansen received the new album (which will be released tomorrow, February 7th 2020) in the mail last week and kindly decided to write a guest essay to accompany this session. So please enjoy the videos and Jansen’s essay below.

Dark in a good way

I really don’t have time to believe in coincidence, but I do sit down to write you a little piece about great band Arborist at the day that thing called Brexit cuts off the UK from the so called civilized world, and just as I have fired up my laptop a postal official drops an envelope on my doorstep to bring me A northern view, which as you should know is the new album by that band. Sometimes things just come together in a way one might not expect.

For instance: I have been playing music on all kinds of radio stations since 1982. (Yes, that’s scares me too…). And bands with some kind of Irish connection have always been favourites of mine, because I’m half-Irish – my mother is from Cappagh, Co. Clare – and because there’s always been a shitload of great bands from that green and wet and beautiful island. A few years back I got Home Burial by Arborist, and was blown away by Mark McCambridge’s band. Some of the songs were dark in a good way, Twisted Arrow should have been a hit (if such a thing still exists, as I said I started out a long time ago), Man Of My Age could have been about a man of my age (as I said, I started out a long time ago) and I Heard Him Leaving is the saddest song I know that uses toilet sounds as a metaphor. I think.

People listen to my radio show Afslag Thunder Road (Afslag means junction, Thunder Road is a song), not specifically to hear my warm voice but to hear new stuff, Americana, ‘men with beards and women with guitars’, soul-singles from 1962 and all kinds of outskirts of ‘pop music’.

One man that heard me playin Home Burial to death (no pun intended) late in 2016 was Willem, a theatre agent and musiclover. He was so impressed that he travelled to an Irish festival the summer after, to see Arborist play. They met up, Willem came up with the idea for a DUTCH TOUR, the band loved that idea, so…..so a few months later Willem asked me if I would try to stir up some attention/publicity for this at-that-moment-not-extremely-well-known-band from Derry. In that conversation I said something like ‘maybe we can do some shows together in some way…’. A few weeks later there was a tour, 9 shows (and I would be in/on most of them).

I loved those nights, being on stage with great and friendly musicians, deciding during soundcheck in what songs I could join in, me putting some poetry and even jokes in, it turned out to be a combination of heartfelt great songs and make it up as you go along. I loved it and the band was very welcoming, although they couldn’t have understood all I said about (the north of) Ireland, my family and the five of them.

And now, as I write, as we speak, that new album. A Northern View. Mark speaks of and sings about ‘the numbness and confusion of things I wanted but uniquely from the viewpoint of this part of the world’. Just so you know we’re not talking simple pop songs here, we’re talking personal, we’re talking poetic, we might be talking political as well. I remember songs Here Comes The Devil and Can I Add You To My Will, as they played early versions of those two years ago, in Utrecht, Leeuwarden, Alkmaar, Rotterdam… And By Rote is my favourite after the first two spins of the album: ‘I remember watching your hands on the off-white keys / O the hollow chords how they’ve stayed with me.’

For me there’s always sadness and melancholy in Arborist’s songs, but they lift me up too, they show me little bits of the world and of deep human emotions in a new way, and that’s what great music (and culture, for that matter) should always try to do.

A Northern View more than succeeds in that. So now all sing along, please: ‘I went out wandering on my dying day / Singing I’m here to stay’.

The Broom And The Cowdenknowes
(Traditional)