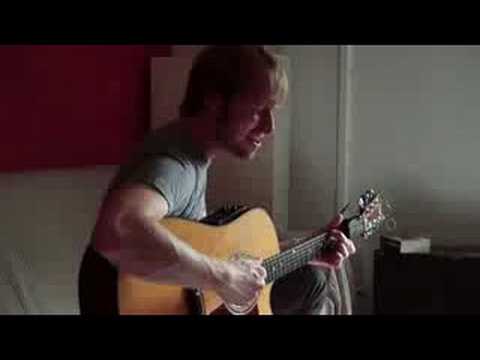 It had been a long time since I was as much under influence as when I went to the Tivoli on last Friday night with Lukas Batteau and Steve Savage. Luckily for the project, we already recorded the – first American – Onder Invloed session earlier that day at Lukas’ home studio.

Steve grew up listening to the records of his grandmother and his parents. Songs by great singers like Frank Sinatra and Nat King Cole came out of the record player and made Steve start singing. They still influence the way the extravert musician from Nashville listens to music and the way he writes his own songs. “Some people listen to the drums first, others to the guitars, I always hear the singing and the melodies first.”

From singing in a church band, he started playing on his own and, later on, with his band Beggars Fortune. Right now, he’s playing and writing on his own. The night before Steve played the Onder Invloed session, he convinced the Paradiso in Amsterdam of his skills as a musician, afterwards he convinced the rest of the city of his dancing skills. He did the same at Tivoli.

But most of all, Steve convinced the cameras he could still sing after a night out. One of the songs he played – ‘Driving With The Brakes On’ by Del Amitri – he claims to have changed his life. The other one is ‘Interstate Love Song’ by Stone Temple Pilots, both were huge hits in the United States.

Due to the fact this session was arranged rather last minute, Steve didn’t have the time to prepare more than two songs, but he made up by playing one completely new song, called ‘The Most Beautiful’ and a ‘cover’ of his band Beggars Fortune.

Driving With The Brakes On (Del Amitri)

The Most Beautiful (Steve Savage)