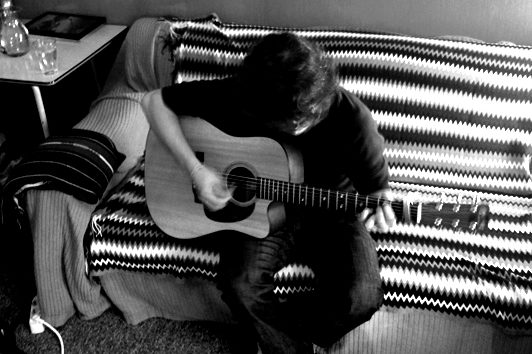 Belgium is the country where dEUS and Soulwax are on top of the music industry, at least in my mind. But there’s more. The newest sensation is said to be Jasper Erkens. He won a price on Humo’s Rock Rally and played in front of thousands fans of Kelly Clarkson and Adele, only 15 years old. Now he’s 16 and ‘onder invloed’.

Influenced by the likes of Damien Rice and Nick Drake, but also by the young David Bowie who he hated at first. His dad – nowadays his chauffeur, manager, camera man and roadie all in one – playing it over and over during car rides turned him over regarding Bowie, it shows Jasper’s love for music at a young age. He asked for a electric guitar when he’s 11, changed to acoustic not a lot later, and wrote his first songs a couple of years after.

Jasper entered the Humo Rock Rally, which is a big event for potential Belgium stars. He ended up in second place, but was voted the public’s favourite. Since then, he played support for popstars like Adele, Kelly Clarkson and Colbie Caillat at big venues and played all the shows with Marike Jager during her last Dutch tour. He even brought a orange towel, hoping to get some appreciation from the Dutch crowd.

It worked, wether it was the towel or his songs – I’ll put my money on the last – he warmed the crowd up as if it was his own show. But before I witnessed him doing so in Tivoli de Helling in Utrecht, he recorded a session for Onder Invloed in the other side of Utrecht. Untill then, I’d never heard Damien Rice being covered without the songs getting ruined. Untill then, because Jasper knew how it should be done.

His single will be out soon, a full album will follow. Keep your eyes on this kid, he might be going places.