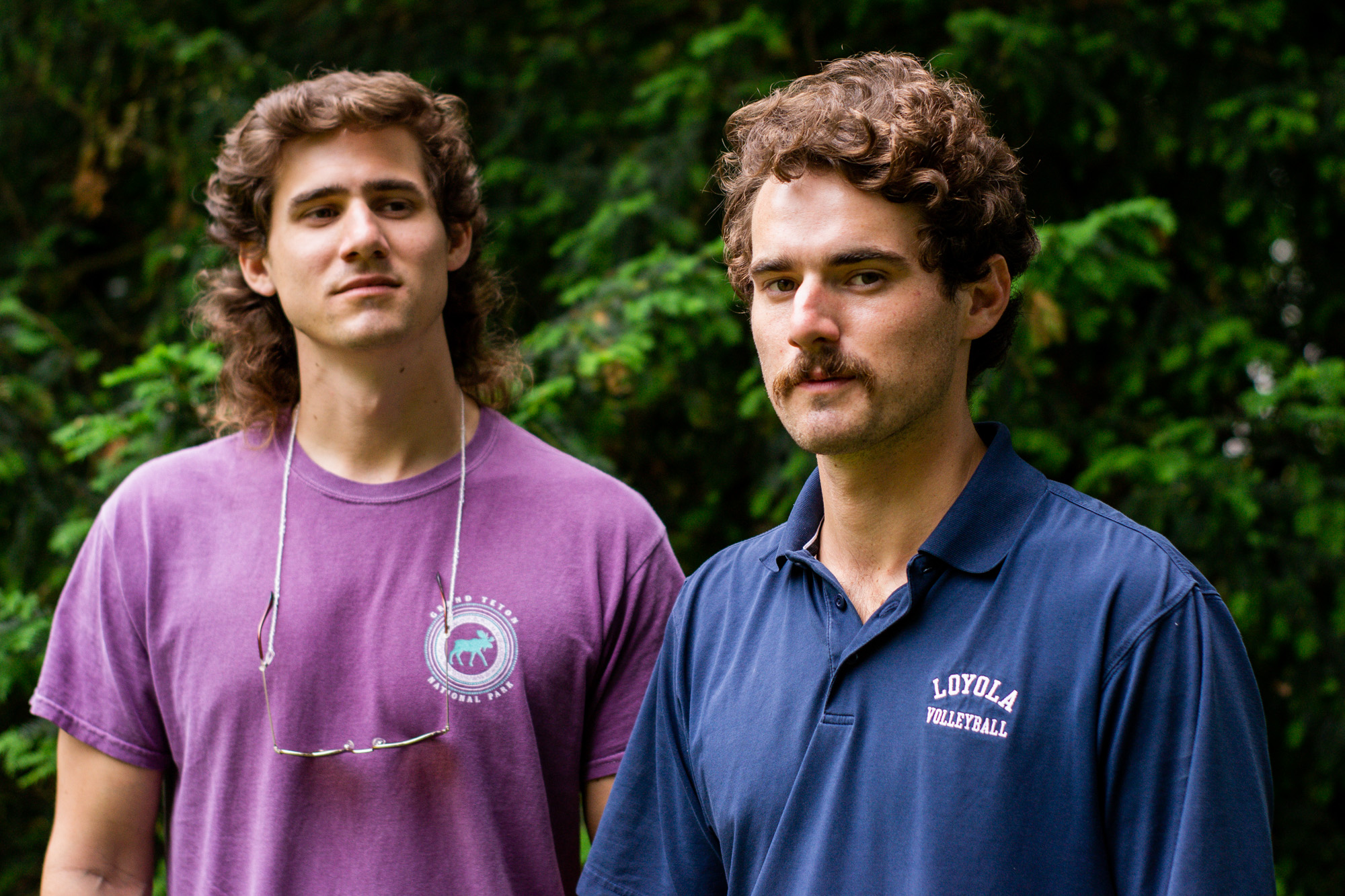 I remember being pretty stressed out. It was sometime in the first months of the year. Sander from V2 Records send me a link to listen to some LA-based songwriter’s record. I promised him I’d listen to Gregory Ackerman’s And Friends, because why not? Sure enough, thirty minutes later I was a bit less stressed. Thanks to Ackerman’s songs, that somehow radiated calmness and joy. That’s exactly what I got from Gregory and his brother Eric when we met in Hilversum to film I Keep Falling, and covers of Jack Johnson and Neil Young.

‘I’ve been writing music since I was about fifteen, but I wrote my album songs over a period of a year with the specific intentions of have those songs work together in a cohesive album. I was thinking a lot about humanity and the shifting landscape of American politics as Donald Trump was coming into his presidency. I felt disconnected and lost and I wanted to put all those themes in the album. I was an art history major in college and found that art always reflects the current socio-economic and political landscape in which it was made, and I wanted my album to more or less function as a piece of auditory art that did just that.’

Thank you very much, Nick Drake

‘Jack Johnson and Neil Young have always been big influences, along with Nick Drake – my dad constantly played the Way To Blue compilation through our house. All of Crosby, Still, and Nash were a heavy influence. I went through a huge Pink Floyd and Radiohead, or a progressive rock phase in high school too. Way To Blue by Nick Drake probably was my favourite album, though I didn’t know it by name when I was young. Nick Drake had such an amazing finger picking style that I immediately wanted to be able to replicate. When I first started playing guitar I started finger picking from the start. I wanted to get good at it, and I have Nick Drake’s talent to thank for that. Is This It by the Strokes was the first album I owned, and that album blew my mind. I thought rock ‘n’ roll was back in a great way when I first played that album. I got it for a Christmas present when I was young and played it nonstop that year.’

The Ackerman brothers grew up in South Pasadena, a suburb of Los Angeles. A great neighbourhood, Gregory tells me. ’There were tons of kids on my block and we always played outside during the evenings and weekends. I had great neighbourhood friends and it was a close community. There was a park nearby we would play baseball and football at. I lived on a private street that had trees growing in the middle of it – big Oak trees that came through the pavement. I remember friends from school always remarking how weird it was, but it felt like growing up in a forest and I loved it. I always felt surrounded by nature with so many Oak trees around.’

‘Both Neil Young and Jack Johnson have always been a big influence on me. I loved Jack Johnson’s On And On so much that I sat down with it one day and figured out all the guitar parts on the album. I was about twelve or thirteen years old and I after a while I could replicate Jack’s style and figured out how to mirror his strumming pattern. Symbol In My Driveway was such a relaxed song (all of Jack’s songs are relaxing), but this one even more so with the sound of the waves opening up the song. I really took a liking to that song and played it all the time.’

Symbol In My Driveway (Jack Johnson)

‘I took a liking to Neil Young a little later in life, when I first heard Out On The Weekend at the age of fifteen, though my dad had played the Harvest record through the house growing up. It took me longer to personally connect with it and own my own copy of the CD. I think it was my brother, Eric’s CD, but we mostly share all of our stuff – or maybe that’s just how I look at it. Out On The Weekend was my favourite track off the album. It was so simple, yet well put together, and harmonica line immediately draws you in. It’s one of my favourites of all time.’

Their mother mostly stayed at home and took care of the kids. ‘I have two older sisters and my older brother, I am the baby. My mom used to be a photographer and gave me a Nikon F2 camera that she used to use – one of the most beautiful cameras out there. My dad works in television as a director, mostly sitcoms and he has done well for himself at his profession. He still works like a madman, and his work ethic has always inspired me.’

Out On The Weekend (Neil Young)

‘Anything that makes me feel’

‘When I feel like I need to be inspired I normally go camping to escape the city and all the city thoughts. I can normally successfully reset myself in nature. It may sound cliché, but it just works. If I can’t get out of the city, I normally just start writing as many songs as possible, and I mostly throw them out, but a good way to get through a music writing depression is just to keep pushing through it. The songs might not be great, but you don’t have to use them, and the process is therapeutic in helping you get out of a negative mental creative zone.’

‘As far as writers go, I’m a big fan of Jack Kerouac, Walt Whitman, Kurt Vonnegut, any Zen Buddhism literature – I’ve been reading some Dogen recently. I also love Rumi’s poems. War at The End of the World by Mario Vargas Llosa was one of the better books I’ve read in the past couple years, same with the Shadow Of The Wind trilogy by Carlos Ruiz Zafon. I also really enjoyed Ask the Dust by John Fante. I read that this summer and I think he does a good job of the mental games a creative person can play with themselves while still struggling to find your footing. Anything that makes me feel.’

Ackerman’s record is called And Friends, simply because the musicians who play on it are all friends of his. ‘I didn’t have too many musical friends growing up, so the friends I chose to work on the album I had all interacted with musically at some point in my life. They are all killer musicians, so I am lucky in that regard.’ But what kind of friend is Ackerman himself? ‘I try to be a good friend, but I don’t always succeed. I can get easily caught up in myself and my music and forget to reach out to old friends. I haven’t kept up with all the friends I’ve made in my life, but those I do spend a lot of time with are extremely close pals. We know most everything about each other and support each other as much as possible. We all have dreams we are following, and I love that about my close friends. They are dedicated to their crafts.’

One of Gregory and Eric’s newer friends is the Dutch musician Judy Blank, who you may know from her recent session with us, and who’s taking them out on tour right now. ‘My first experience with the Netherlands last May was amazing. I’m really looking forward to touring with Judy, because she has become a great friend. We stayed in Utrecht last time and that’s where Judy lives. She’s been a great tour guide and companion to us out-of-towners. We’re hoping to write some music together and even hit a studio while we’re here this time.’

Out On The Weekend (Neil Young)
Spotify | iTunes | Youtube

The porch of V2 Records’ office in Hilversum, The Netherlands.