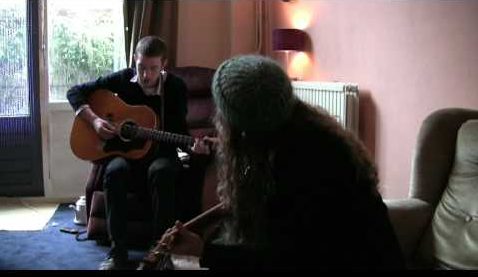 It was a great night, the Onder Invloed at Home in Nijmegen with Lea and Davie Lawson. Two nice performances, a lot of nice people and a bed to sleep in, after watching The Last Waltz on dvd and throwing shoes at Davie’s head until six in the morning. The next morning Davie and Lea decided to play a song together, not knowing my cameras were on.

That resulted in Nick Cave’s ‘Into My Arms’ being the first song they’ve ever played together. And you’re lucky, because you get to watch the video of the spontaneous ‘session’ by Davie Lawson and Lea Kliphuis. Just a couple of hours sleep, two cups of coffee, and still able to sing like this… Nothing more to say, watch and enjoy.

And if this still isn’t enough for you, you could go to the Exclusive-page and watch Davie Lawson play the traditional ‘Banks Of The Ohio’ a couple of minutes after playing ‘Into My Arms’. You have to be signed up to the monthly Onder Invloed Newsletter to have the password to the Exclusive-page. If you’re not yet signed up, you need to send an e-mail with your name and city to newsletter@onderinvloed.com