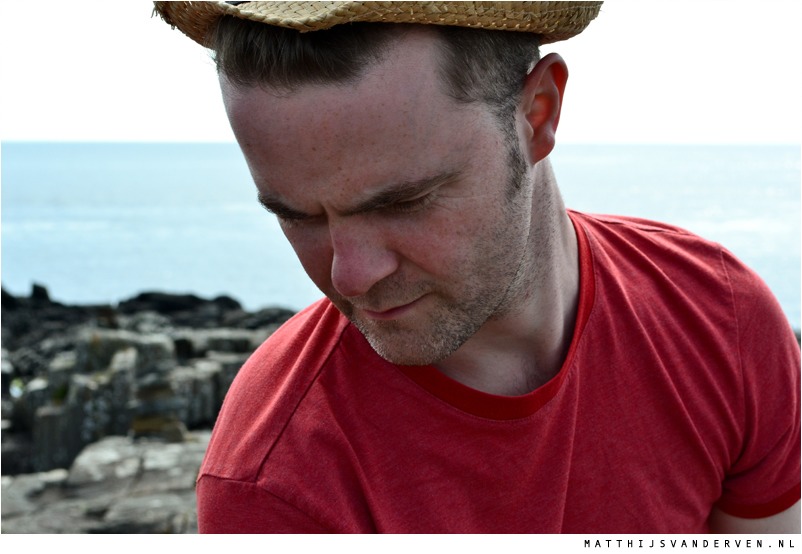 Biff Smith is the lead singer and songwriter of the Scottish band A New International, formerly known as The Starlets. He’s one of my favourite songwriters and currently preparing to release the first album as A New International, since declaring the name The Starlets (three albums) dead. Biff’s also a gifted storyteller, so I’m thrilled that every now and then he’ll write a blog for Onder Invloed.

The bus into Utrecht city centre eases to a halt at the lights as a stream of cyclists pour across the street. My vacant gaze glides out of the window and rests upon a man rolling a massive cabbage down the street. It is unquestionably the largest cabbage I have ever seen. He stops the cabbage at a lampost where, locked securely, awaits a classic Dutch-style bicycle with wide, tall and elegantly curving handlebars.

Fastened securely to the bicycle rear is a wide-loading, black leather bag. It is a sturdy, well made and spacious bag. The man is, himself, tall and impressively put together but still I cannot help thinking that bag, man and bike may have, all three, met their match here in what is quite literally a force of nature.

This is a cabbage of truly monumental proportions. The man solemnly surveys the situation then, with grim-faced stoicism, bends to take the strain. I am filled with unqualified admiration for him as he hoists the cabbage from the ground and swings it up on top his head. I am reminded here of those formidable worker ants which fetch and carry burdens many times their own size and weight. He tips the cabbage from his head down into the bag only to find that, frustratingly, the cabbage looks to be an inch or two too wide to slip inside the bag. Now the struggle begins in earnest. The man lifts and lays, rotates, coaxes and cajoles, but all to no avail as the recalcitrant cabbage continues to sit proudly above and beyond the confines of the bag. The man pauses here to wipe his brow and consider his options. I glance at the traffic lights and am relieved to see that they are still red. I wouldn’t miss this for the world.

Turning back, I see the man has loosened some ropes from underneath the bag and is attempting to tie the cabbage down to both bicycle and bag. A brief measuring of the situation however instantly rules this out as a potential Plan B when it becomes obvious that the ropes are of insufficient length to circumnavigate the cabbage’s fulsome girth. Back then to Plan A, and this time with exuberance. By the dark, determined look on the man’s face, I suspect that his approach shall henceforth involve less carrot and more stick. The cabbage is once more coaxed above, tantalisingly almost into the bag, and held in position with one hand. The man then bends down out of sight behind the bicycle and a period of strange turbulence ensues. Bicycle, bag and cabbage totter and shake precariously as, obscured from view, the man engages in some hidden, mysterious adjustments. Finally, he emerges from behind the bicycle with a look of wild triumph and a large, brown boot in his hand.

It is evidently now time to show the cabbage who is boss. He solemnly raises the boot over his head and proceeds to pound furiously at the cabbage, perhaps more in frustration than in any genuine hope of improving the situation. Amazingly, however, the cabbage slowly begins to sink into the bag. This frenzied assault lasts for at least a full minute or so during which not a single passerby stops or bats an eyelid at what is surely the remarkable sight of a madman thrashing a cabbage with a boot. In broad daylight too. Perhaps it is an everyday occurence in this part of the world. Finally, anger spent, the man pauses to admire his handiwork. The cabbage now sits more or less snugly within the bag and, although it’s huge bulbous dome still protrudes rebelliously, it is, against all odds, now more or less ready for transportation.

At this point the man glances up at the bus and sees me watching him. I bow my head and give him a generous round of applause. The man inclines his head graciously, smiles and gives me a quaint little stage bow just as the bus pulls away and as he disappears from view I’m still applauding, vaguely wondering what he wants with so much cabbage.

Biff Smith is the lead singer and songwriter of the Scottish band A New International, formerly known as The Starlets.

He’s one of my favourite songwriters and currently preparing to release the first album as A New International, since declaring the name The Starlets (three albums) dead.

Biff’s also a gifted storyteller. Every now and then he’ll write a blog for Onder Invloed.