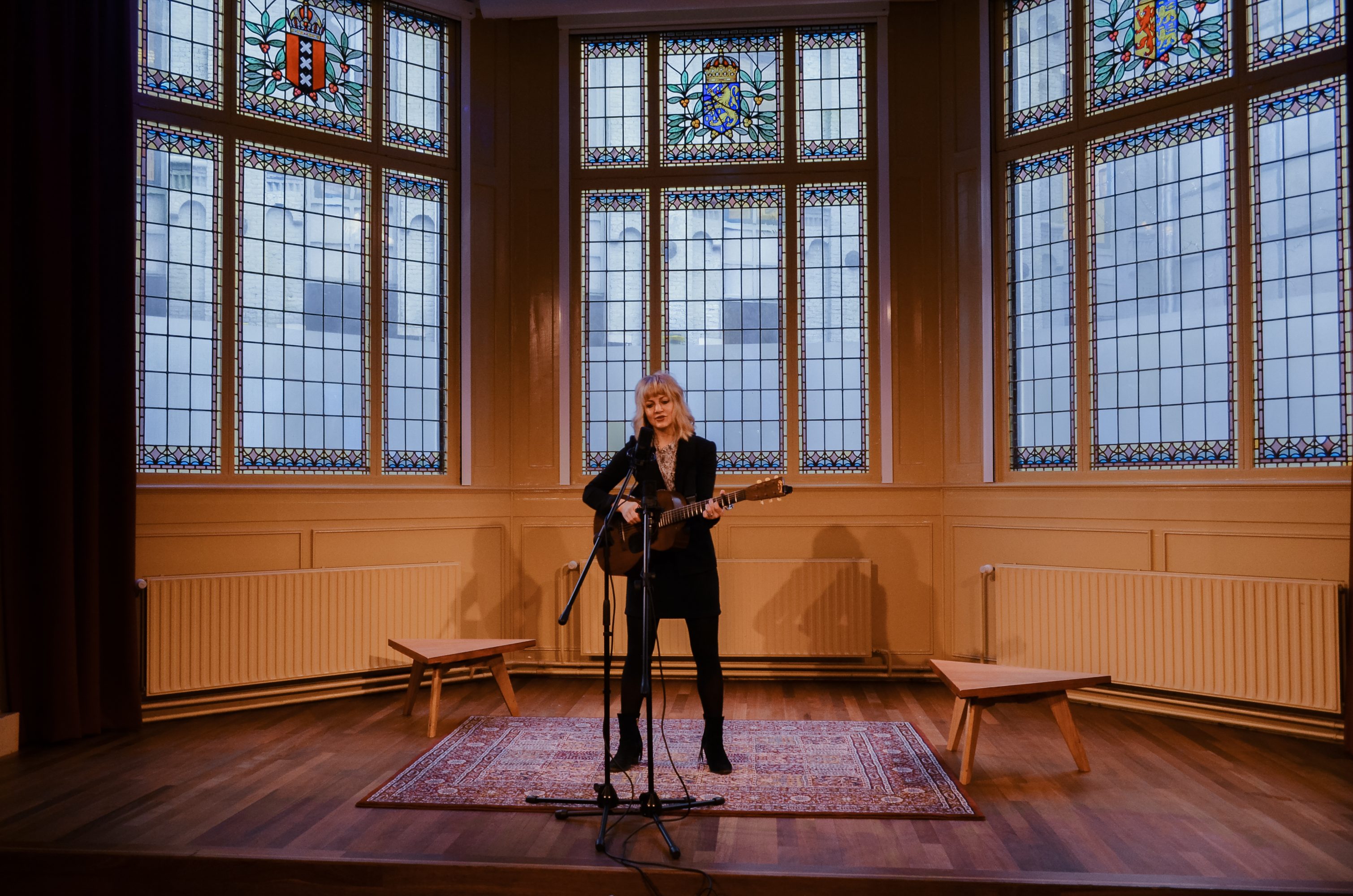 When Anaïs Mitchell recorded this session for The Influences in 2017, her musical Hadestown was still somewhat in development after runs at the New York Theatre Workshop and Canada’s Citadel Theatre. Since then, it’s had runs in London and Broadway and won awards. It’s a great to see Mitchell have this much succes with the staging of her 2010 concept album that also featured Justin Vernon, Ani DiFranco and others.

In 2017 Mitchell toured as Josh Ritter’s support, when we met at De Balie in Amsterdam, where she recorded covers of Bob Dylan and Rachel Ries (Her Crooked Heart) and a song from Hadestown.

‘I grew up with Bob Dylan, my parents had those records in their collection. I think that song is kinda like when the portal opened. It feels channeled. I don’t know if it was the first Dylan song I heard, but I do know I always responded to his early records. This like really folky, almost solo stuff. It feels so inspired. Obviously there’s a lot of words, you just are so transfixed by hearing image after image. I think it’s a song that feels more and more relevant and real nowadays, even though he wrote it so long ago.’

‘Dylan was one of the bigger artists for me growing up in Vermont, together with Leonard Cohen, Joni Mitchell. All those people. My parents were hippies, they were back-to-the-landers. They grew up in the suburbs, then hitch-hiked through California and decided: “We should buy a farm.” So I grew up in a very rural place. They were into those musicians and into lyricists. Dylan of course is the bible of that. Kind of undeniable.’

‘When I was a teenager there was a lot of really powerful female songwriters: Ani diFranco, Tori Amos, Dar Williams… They were very emotive and they were making folk music with their own, sometimes unusual voice. That inspired me to start writing songs when I was seventeen.’

‘The first song I did is a song by my friend Rachel Ries, who now goes by the band name Her Crooked Heart. Rachel and I have know each other since we’ve both started writing songs in our early twenties. We met at a folk festival and we’ve been friends for a long time. She also played in my band for a while, but she’s got her own songwriting career. I’ve always admired her style of writing. I recently learned that song because she’s putting out a new album and reached out to a bunch of her friends and asked them to cover songs of hers. And she was going to cover our songs too. So I learned it a few days ago and was really blown away by how simple it is musically, and how much the words really transport me.’

‘Rachel’s a little more abstract as a lyricist than me. She’s also got a real talent for arranging and producing. She’s produced and co-produced so much of her own records, so I think she writes songs that kind of expand… They’re written in a way that she hears all these other parts that end up making the song what it is on the record. She’s a really interesting mix of indie rock and also classical training and church background. We have some different frames of reference. I might be a little more literal, or story oriented.’

‘My song is from Hadestown, my musical. It’s not on the studio record I made for that show, because it’s newer than that. I’ve been developing the show for about eleven years. We just were up in Edmonton, Canada and before that we were in an off-Broadway theater. We’re trying to go all the way, so I keep working on it. That song is one that Eurydice sings, she’s the practical minded girlfriend of Orpheus, and she’s singing about falling in love with this impractical artist. That’s her song.’

‘Writing for my musical is the same in looking for some inspired heart of it, followed by a lot of work to finish it. But certainly, for the musical there are these voices of other characters than myself. So that’s really freeing. It’s also like having assignments. I’m working with a director, a dramaturge and producers, so everyone has thought and input. Like: “We really need to hear what Eurydice is feeling in this moment.” So it feels more like trying to do a puzzle, you know?’